Northern Battlefields 2 is a regional tournament with a 3 game mini-tournament day 1 and a Apocalypse game day 2. Here’s my tournament report from day 1 🙂

As I’m one of the organisers of NB 2 and responsible for day 1 I had to forfeit the first game due to some people dropping out at the last minute. Luckily someone did show up during round 1 so I could get some games in from round 2. I did snap a few pics from round 1 though.

From the individual games in round 1. First some fantasy games. We’re a widely spread and thinly populated region so we try to cater to as many as possible. 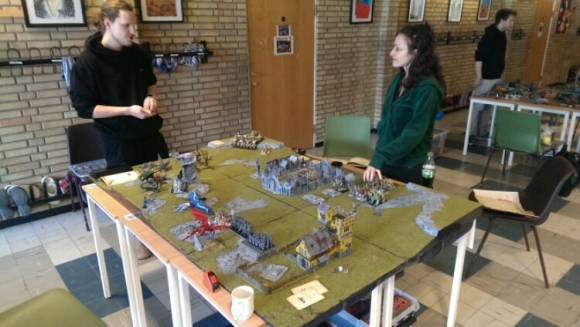 The main bulk though was 40k. 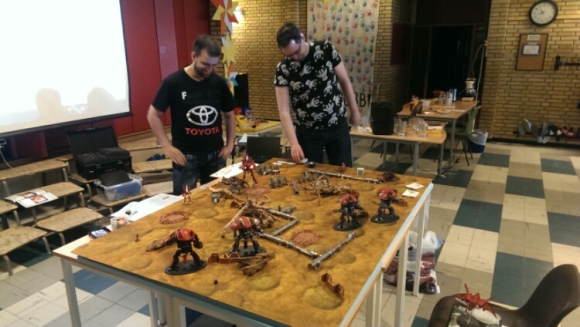 I’ll focus on 40k for my report as that’s what I played myself.

Round 2
I drew up against Christoffer and his Dark Angels.
I can’t exactly remember his list but I think it was close to this.
Librarian lev 2 (warlord)
– Command squad
5 terminators
5 devastators
3 Bikers
5 scouts
2*10 tactical squads
Flyer

I got to decide side, though he went first. I didn’t manage to seize.

Bikers scout moved and aim for my stalkers. Cast prescience on devastators. Luckily they can’t penetrate the shield on the errant as my saving throwes are hot. Bikers kill 3 stalkers but they hold. Luckily!

Stalkers and errant target the bikes.

Same with vanguard. The onagers destroyed the devastators in the shooting phase and the Vanguard took out the bikes. First blood is mine!

Turn 2
All DA target the errant now. Failed to cast misfortune on him though and that pretty much sums up Christoffers turn. 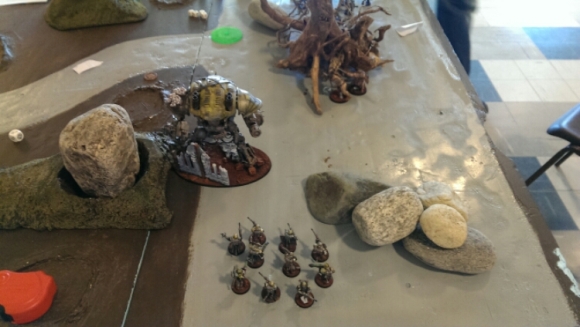 Errant, vanguard and stalkers moved up. In the shooting phase the onagers and errant killed the librarian getting slay the warlord. Stalkers assault the leftmost tactical squad but is gunned down on overwatch.

Turn 3
Flyer comes in and target my rangers immediately.

Terminators also entered and deep strikes in my deployment zone. 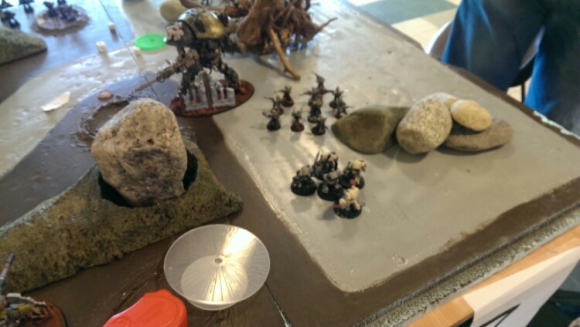 Terminators killed 3 vanguard but they hold. Flyer only killed one ranger.

In my turn the errant moves unto a crusade objective. Vanguard moved away from the terminators and the paladin on the emperors will objective.

I boosted my bs +3 on the skitarii maniple. The vanguard and onagers then annihilate the termies.

Turn 4
Flyer takes another run against the rangers killing 5. They hold. Tactical squad leftovers run on his EW objective.

I boosted my bs +2. Errant and onagers target his EW objective holders and wipe them. Rangers and paladin snapshots the flyer taking 1 hp off. Vanguard shots at the leftmost tactical squad killing 2.

Flyer flies off the table. Tactical squad shots at the vanguard killing 5. They hold.

I boosted my bs +1.
Onagers killed the scouts and the paladin killed 4 tactical marines.

I rolled a 4 and its another turn.

Turn 6
His last member of the command squad runs for his primary objective but failed to reach. Flyer comes in on another run.

Killing all but one. He fails his test and runs.

In my turn the ranger rally. In the shooting phase he runs back to the crusader objective.

Errant and onagers then combined killed the last member of the command squad.

Round 3
This round I’m against Kim and his Tau army. He ran roughly this:
Commander with 1 bodyguard.
3 crisis suits
2*10 firewarriors
2*5 pathfinders
3 broadsides
2 hammerheads
1 riptide

I got to decide side, though he went first. I didn’t manage to seize. See a trend.. 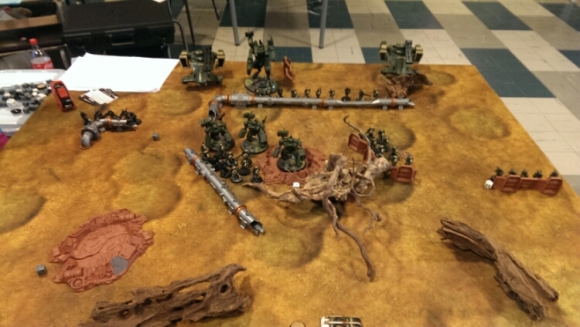 Kim target my stalkers. 2 markerlights on them then the broadsides killed them for first blood. Drats..
Riptide shots at the onagers but scattered on the vanguard killing 2. He then score 2 tactical vp. 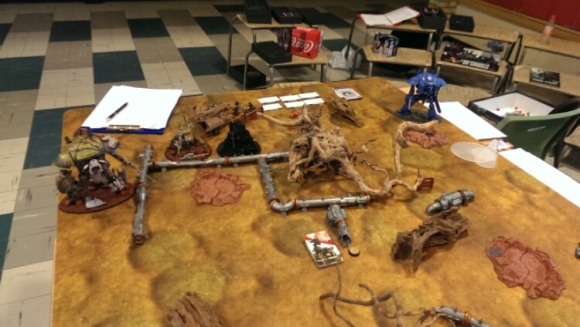 Move up the errant. Shooting phase. Paladin killed 4 firewarriors, the rest flee. Nothing else happen but I score 1 tactical vp.

Turn 2
Commander hold back in reserve. Suits come in close to the relic.

He withdraws his units close to the errant. The fleeing firewarriors doesn’t rally and flee off the table. He then open with everything against the errant but failed to inflict anything. Puh! Suits nab the relic and scamper off.

Errant continues his aggressive move up the flank. The rest stays. Errant killed 3 firewarriors, the rest run. Onagers killed one suit but they hold. Paladin stuns the left hammerhead. I then score 2 tactical vp.

Turn 3
Commander still doesn’t want anything to do in this game. Lol! Firewarriors rally. Broadsides fail to hurt the errant though one hammerhead takes a single hull point off him. Suits continues to withdraw from me with the relic. 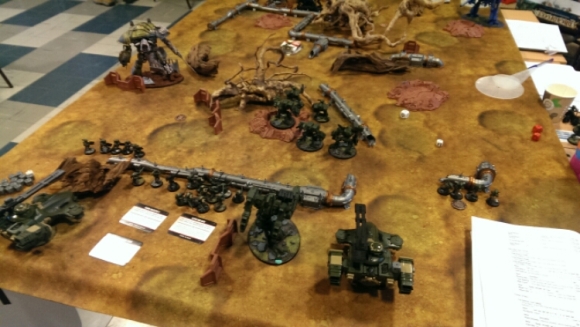 Errant now close in on the Tau battleline. I boosted my BS +3. Onagers then killed two broadsides outright. Errant killed another suit, the remaining suit panics, drop the relic and flee. Errant then assault the closest firewarriors – killed them and stomps two other squads killing 8 in total. Awesome! 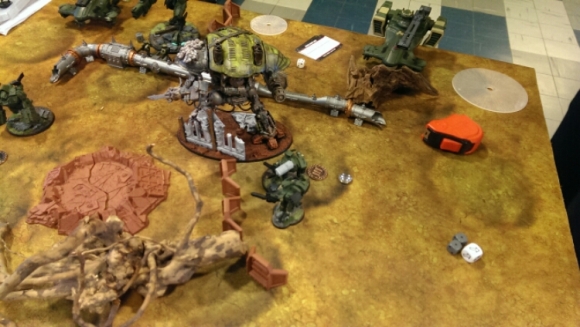 Tau then close in and surround the errant.

They then proceed to murder it good and proper resulting in the worst kind of explosion killing the tau warlord and killing enough from another firewarriors unit making them flee off the table as well as the last suit.

My turn. I boosted my BS +2.
Onagers failed to hit the hammerhead and the paladin only wounds the broadside. I score d3 tactical vp gaining +3. I got a good hold of the game now. 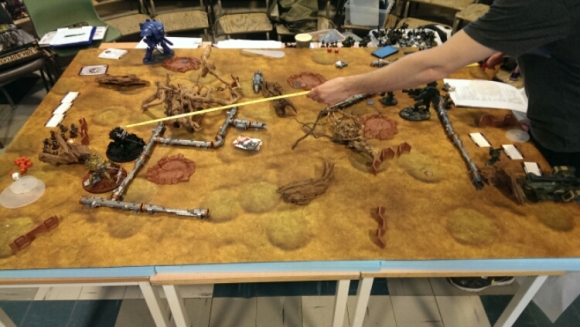 I boosted my BS +1. My Onager take out the last broadside.

Post tournament thoughts
Okay so I only got two games in but I’m starting to get to grips with the new weapons and units. They’re all very potent! Knights worked very well as both anchor and hammer so they stay. I do notice however that I’m reluctant to go on the offensive with the vanguard and rangers. They’re good but when you only have one of each it’s a gamble.

Day 2 – Apocalypse and End Times
I didn’t play day 2 as I was busy making sure things where running smoothly and starting to tidy the rooms.

Here’s some mood pics from the games. First the End Times city sack.

Over to the Apocalypse game where the evil forces tried to stop the Imperial Leviathan. 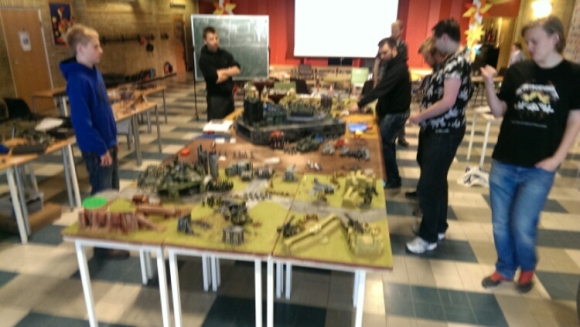 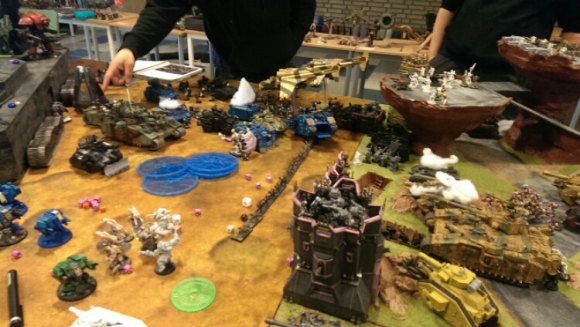 The day then ended with the last prizes for those playing in the Apocalypse and End Times games.

The final thing we did was drawing the lottery winner of a brand new Citadel Battle Figure case – which I won! Yay 😀 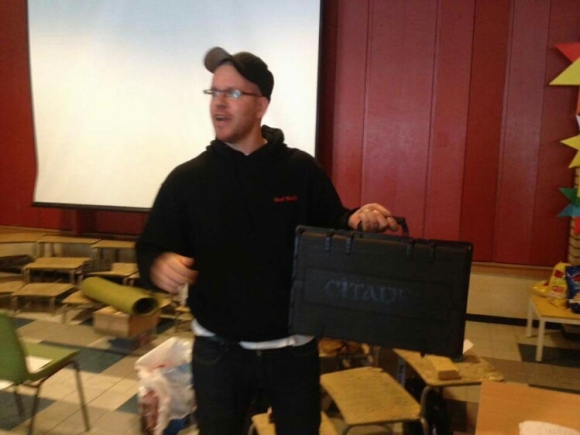