Been ages since my last game so about time right 🙂 Today I’m facing a nasty Tau list wielded by Andreas! 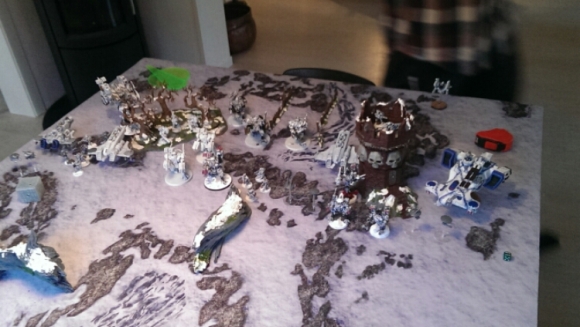 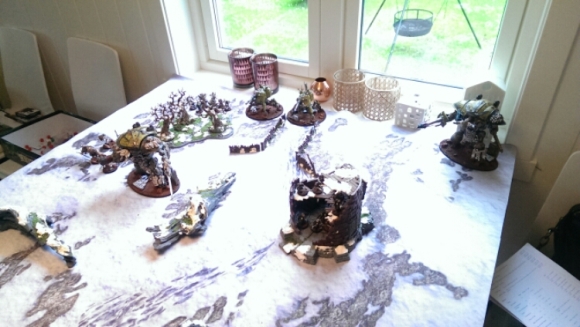 The game
I rolled highest and elected to go first. He tried to seize but only rolled a 5. Here we go!

Turn 1
I move my ruststalkers and runned them towards the hammerhead. Errant moves 12″.
Boosted BS with 2. Onagers insta-killed 2 broadsides. Rangers killed a firewarrior unit for first blood. The errant killed one broadside from the other squad. Both broadsides squads pass morale check. 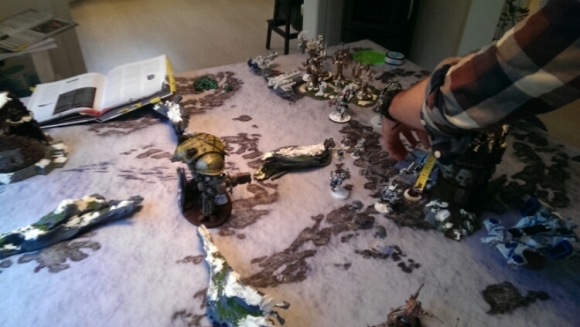 Andreas’ turn. Drones disembark to block his suits from my ruststalkers. Piranhas advance, as do stealth suits.

He then markerlights the ruststalkers, hitting with 4. Suits then open up on them insta-killing them in return. Errant gets 1 markerlight and hammerhead hits and glance 1 hp off. He loads off with a ton of stuff on the errant but fails to penetrate. 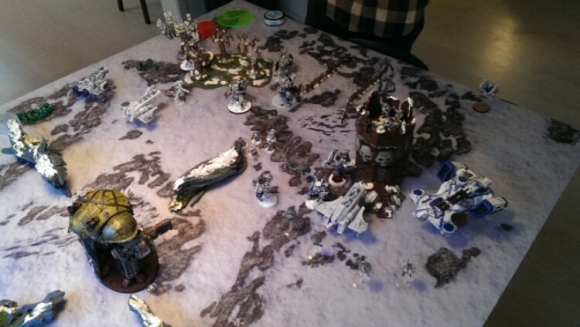 He obviously fears my wrath and starts scooting away in the assault phase..

Onagers killed the remaining broadside in squad 1. Rangers glanced 1 piranha to a wreck and immobilized the other. Paladin then mercy killed it. Errant killed another broadside in the second squad. He then assault the drones and pathfinders.
Kill 3 pathfinders and then stomped 2 drones and 1 wound off a suit. I lock these units in combat as they don’t flee. Sniggering ensued 😀 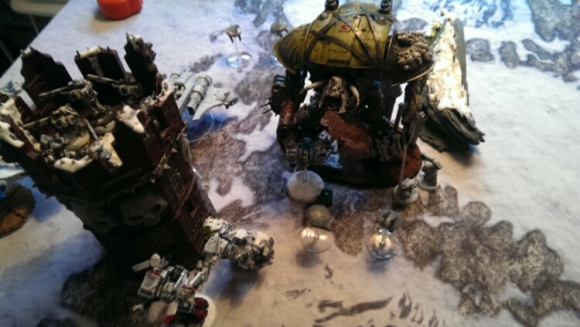 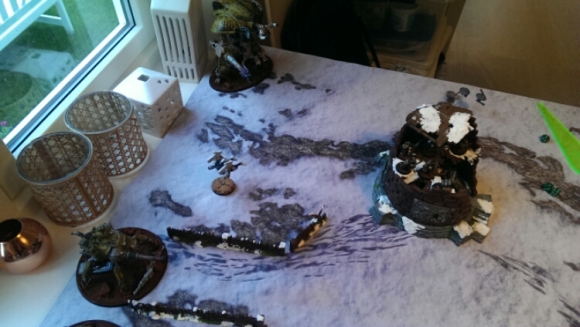 He then cautiously advance forward. 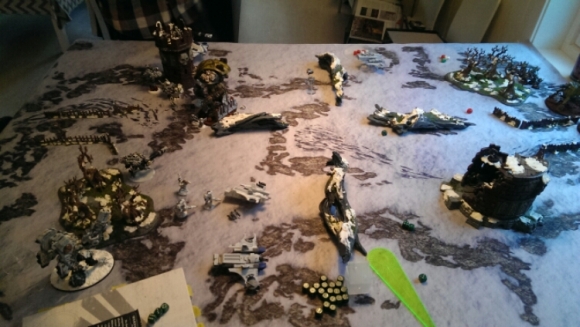 Shooting. Riptide overdrive and shoot at the rangers killing 7. Last broadside following up killing the last 3.  Hammerhead target the vanguard killing 4. Blaster suit explodes one of the onagers.

In the combat the errant killed everything but 1 suit and the commander. They hold. Not so good.. 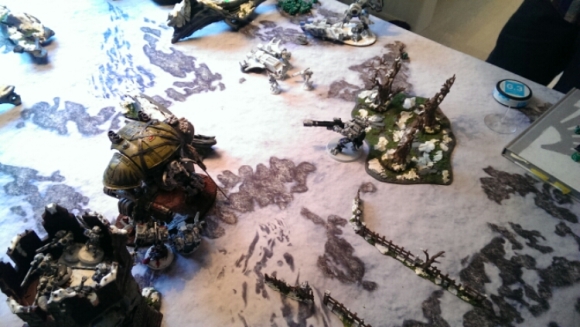 Turn 3
I advance with the Paladin to kill the blast suit. I boost bs +1.
Paladin and the remaining Onager target the hammerhead and glanced it to a wreck. Nothing else has range.
Paladin then assault and D kill the suit. Errant fumbles and doesn’t do any damage..

Andreas. Piranha try to melta my Onager but I actually save. Yay! Drones shoot at the vanguard killing 1 but I managed the ld test and I’m not pinned down. Puh! 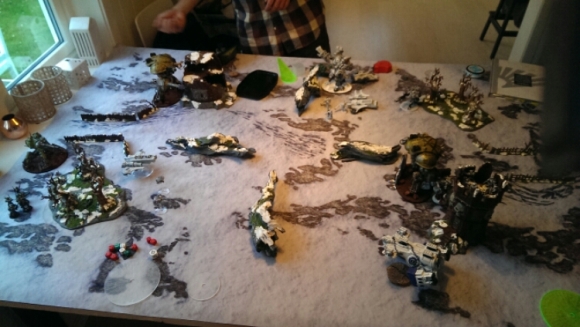 Riptide miss the onager but the last broadside take a single hp off. He then scoots a bit. 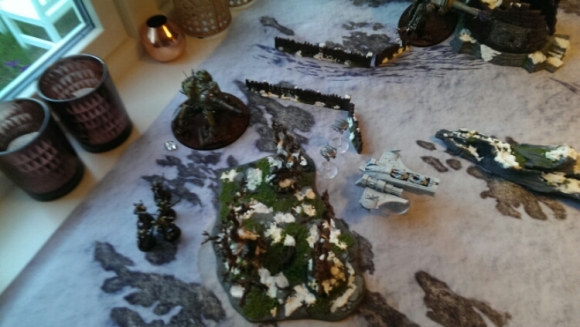 In the combat only the commander remains with 4 wounds. The errant isn’t dead 😉

Turn 4
Paladin moved towards the piranha. Vanguard moved back to get as far back as possible.

In the shooting phase the vanguard takes the two drones out. Paladin failed to wound. Onager takes the last broadside. Paladin then charge the piranha and take it out. Errant finally killed the commander getting slay the warlord.

Andreas turn. Riptide shots at the vanguard but only killed 1. Broadside missed the errant. Stealth suits took a hp off the errant though. 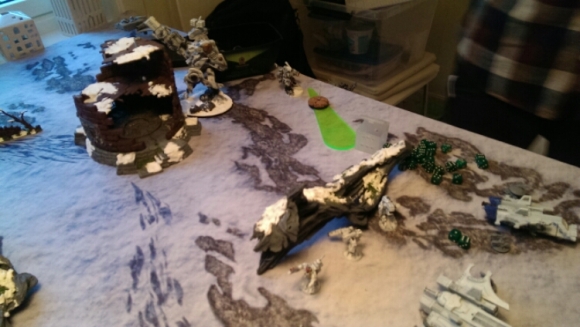 Turn 5
Paladin goes after the Riptide, errant the last broadside. Shooting doesn’t do much but combat does. The knights annihilate them totally. Awesome.

Then something not so awesome. Those blasted stealth suits managed to explode my errant 😦

Lucky thing is that he then rolled a 4 so it’s a turn 6. Payback!

Turn 6
Paladin shoots at the stealth suits though they saved despite massive hit..then needing a 10″ to reach combat I actually roll a 10. Score! He then wipes them out.

Andreas has one firewarriors squad left but they can’t do anything and we’re done.

Post-game thoughts
I didn’t have the time to write another list trying out the other knights and the Holy Requisitioner formation opting to take the list I had with me to Northern Battlefields II. Luck has it that the list is surprisingly strong and flexible but make no mistakes those knights are essential and the key rock that makes the rest work even better than you’d think.

Either way, I now have a rock solid list but I’ll still test out all of my new toys next time.

Until then, have a good one 🙂

One thought on “Battle report! Admech vs Tau”