I was set and determined to kick some Dreadtobering ass and get my stompa finished. Then I saw Mad Max Fury Road..

First off I’m not exactly sad for seeing the movie – it’s freaking brilliant from A-Z (or Å in Norway because we have more letters than the English dictionary). WOW sums the movie up quite nicely 🙂

But what does this have to do with Dreadtober.

Well it kickstarted my third gang/warband (I have a total of 5 concepts I’m realizing per now) that’s what.

Be still, my dog of war. I understand your pain. We’ve all lost someone we love. But we do it my way!

A brute gen-enhanced to be able to sustain the grinding industry of Beluga 61. Now free of his shackles as the Aftermath of the massive conflict has left the strays and dregs behind restructuring the remaining society upside down.

This particular being was previously a work leader. This is known due to the searchlight mounted on his shoulder. His arms are double fitted massive chainsaws. Now undoubtedly used to combat the enemies of the former slaves. The helmet has been fitted with horns and other macabre items. This is likely to show status within the Pit Slaves. 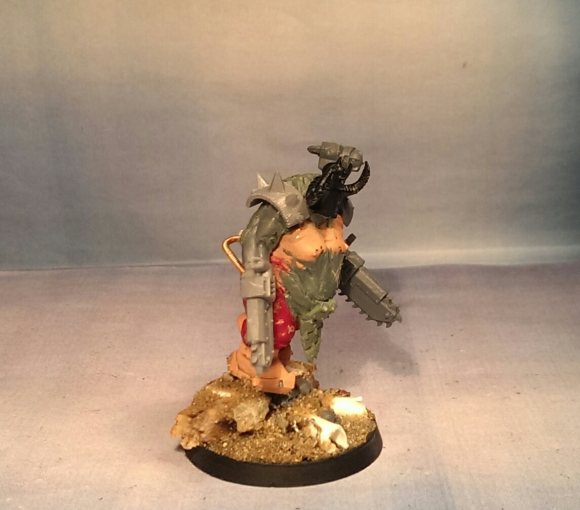 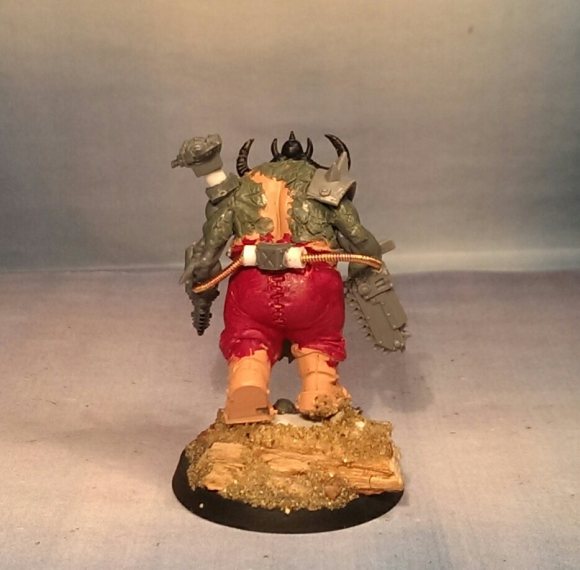 Here you see the external powercell for his chainsaws. Typical way of equipping slaves with a low life expectancy. It eases the recycling of equipment. You can also see his scarred back. Curiously his spine is left unblemished. Probably to sustain him as long as possible but it’s clear that this one was a problem prior to the Aftermath.

So yeah. There you have another small project and a bit more on the scenario I’m slowly building for my INQ/’munda adventures.
Btw, for the keen eyed you can see I’ve been inspired by some Pit Slaves from last months Visions. Difference is I used an ogre as base.

I recently traded my painted portion of DKoK..

..for a massive bits haul. 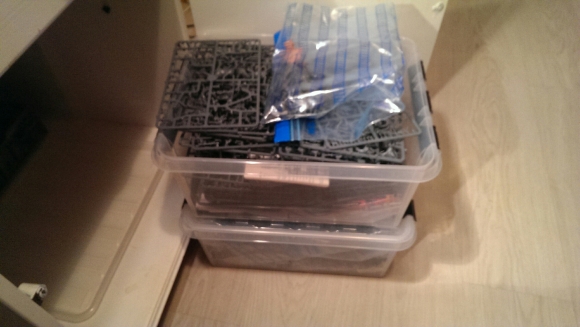 About half of that is from the trade. Ogre Kingdoms, metal Imperial Guard and a Valkyrie. The other half is the box I use primarily to support what I’ve got going on my table.

I don’t plan on using the Ogres for AoS but for various 40k/INQ/’munda projects. Regarding my DKoK I still have a substantial amount that will also be included in the same type of projects as with the Ogres.

But speaking of AoS (this thread derailed a few times now, lol 🙂 )..

I got hold of a large oop Khemri army for a very cheap penny. I just couldn’t say no, especially since it was my birthday on Friday! That army will have one foot in Oldhammer and one in AoS and I’ll theme it on a force from ET: Nagash. So soon my precious, soon 😀