We rolled relic and dawn of war.

He got the warlord strategic trait with nightfight and loads of spells I’ve forgotten. He had two heralds.

I got infiltrate and the -1 to enemy reserve rolls and banishment, hammerhand and purge soul. Ace so far.

He rolled highest and wanted me to start deployment but since my entire army infiltrate he decided against it. So he deployed, and I could counter it. Set up the tide against the majority if CSM and the plaguebearers. The shoota mobs on the hard flank facing his warlord in plague marine squad and chaos spawn. I wanted to lure him from the center with some tempting first blood “victims”.
I then seized initiative 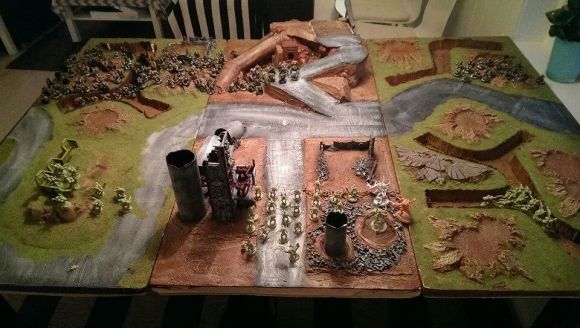 Turn 1. Tide shuffles straight ahead, shoota boyz move so all is in range and kills three marines. He summons another herald. Then charges one of my shoota mobs. Overwatch deals two wounds. He rolled poor and only killed two, I rolled good and dealed 4 more wounds. So two spawn dead.

Turn 2. I prepare for charging the center, pick up the relic. Roll hammerhand on the tide, fail on banishment. The unengaged shoota mob continue to harass the chaos lord. I roll like **** and only hit one plagubearer unit. So in the shoota boyz vs spawn nothing happens.
In the other I massacred the bearers and two heralds.
He unleashed all that he had of shooting on me. It itched but not much. He also turns his attention towards the center with his lord leaving his back exposed to the shoota boyz. Tried to summon more bearers but failed. He then charged with bearers and plague marines into the tide. Overwatch hurt him bad on the bearers. He challenge as he must, I use big chopper nob and strike before him as he has pf. Killed him and the rest. Lost a few boyz. Not many.

Turn 3. I prepare to charge havocs and continue to pester his lord with shoota boyz, also killed the last Herald from tide shooting on him. I got hammerhand through. Killed one marine in lords squad. Spawn vs shoota mob, spawn finally dies..havocs die.
He prepare to charge the tide with Lord, manages it, rolled like a boss against overwatch. Challenges, I responded with tide warboss. He got one wound through with pk, rolled like ****. Cybork saved that one. I wound with three, he saved two but since I’m strength 10 i instant killed him. My boyz clean up the rest.

Okay so the weirdboy is awesome and I think a more competitive choice compared to the painboy actually. You just need to weather the wounds coming your way. I did however set the ardboys in front to absorb the worst, and that works. My shoota mobs where also stars. 172 points stalling a chaos lord, 6 plague marines and three spawn for most of the game. Check and it would’ve been okay if they died also. I thought they would actually.
For last, big choppa nobs are kings. Why I haven’t used them before is beyond me.