I think I’ve mentioned it before but I can’t remember. Still.
In my 13 first years I only played fantasy. Tried 40k, epic, WHQ but fantasy was where my heart was.

Though we grew tired of it eventually and started 40k, FoW and Blood Bowl. I’ve made a few fantasy armies these last 5 years (VC, O&G) but only played a small handfull of games. I even sold the VC army.
Last year I think it was, I got a trade on Chaos Dwarfs, 4th ed miniatures no less. Funny thing is that I hated the minis back in the 90s but I love them now.

Okay, but the point is. I’m really enjoying building and painting the army. And of course making rock hard lists and playing.

So this last Friday I had a 2k battle versus Klas and his beastmen.

2k on the button.

2k on the button here as well, though I obviously don’t remember all of the details. 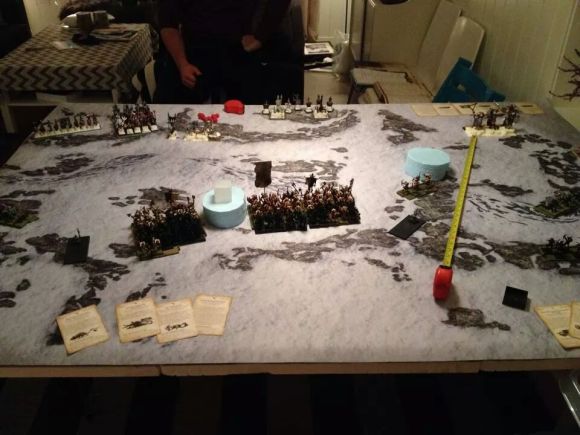 Only pic of the match, sorry about that.

Okay so Klas started, and advanced. No-brainer right there!
I held with my dawi but set up the khans in redirect mode, advanced the fireborn towards his main and the centaurs to sweep up the chaff.
Then magic. I had purple sun, cast it. Miscast…lost three levels. Gained 1 in t. Misfired the purple sun. It went over my dawi. Hashut!

So my strategy went to shit there. After that he came at me, the fireborn held the bestigors one turn but they and the gors charged my dawi. Bull centaurs kill chaff. Harpies kill one deathshrieker, daemonsmith kill them right back.

My dawi then laugh the goats in the face for three turns. I only conceded my castellan that lost in a challenge against the beastlord.

One hilarious thing that happened during the game was that Klas cast the transmogriff spell something on himself. At least he turned into a grand fire dragon. Though he miscast doing so 😉 lost 10ish gors in the explosion, could’ve saved the dragon/mage on a 4+. Didn’t 😀

I lost 9-11 but what an entertaining game!

Okay so got some great motivation and got cracking on the paint. That won’t be revealed until part 4 in my BoLS article series but here’s a WiP of my infernal castellan.

Looking forward on getting some paint on that banner!

One thought on “Battle report: Chaos Dwarfs vs Beastmen”