First game of 40k in 2015! Pretty sweet actually, been a couple of months since I played 40k as I’ve had the fantasy bug.

1996. Not the tightest list but I don’t mind in friendly games.

The game
Highlights as I remember them.
Infiltrated the meganobs to get them stuck in early. He had Typhus, both termie units and the helbrute formation in reserve.
I started, he didn’t manage to seize.

Turn 1:
I advanced with my right flank meganobs incl weirdboy towards the raptors. Stompa advanced as well. Put a lot of shooting into the raptors. Killed only one. Other than that I took 1 hp of each rifle brute. Killed the raptors in my assault phase and got first blood. I did it wrong here as I can’t assault in turn 1 when infiltrating. My bad..but in my defense I don’t think it would’ve changed much as he was surrounded and alone.

Nothing else happened that was noteworthy this turn.

Turn 2:
I took 1 spawn in the shooting phase (t6 is hardcore!) and took out one rifle dread in assault.
He got everything in from reserve. Termies misplaced so I put them far back in his corner where they couldn’t do much harm. The formation landed in my backyard. Lucky me the termies failed.. 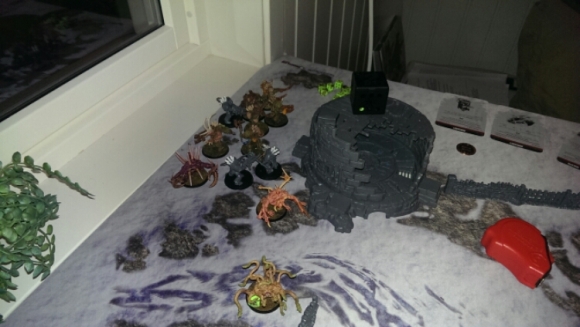 Turn 3:
I assaulted the formation with one mob of MANs and warlord. Wiped them. Stompa killed the bikers but the Lord had backtracked in his turn 2. Lucky for me he periled and died giving me slay the warlord.

He did wipe out one mob of MANs with the one mob of termies, typhus and 10 summoned plaguebearers (they came in last turn).

Turn 4
My stompa retaliated and sniped typhus and termies with the deffkannon. In his deployment zone his last unit of termies charge that MAN mob. Kills 3 but I take him out nonetheless. My dice where hot!
Another plaguebearer mob assault the stompa and glance 3 hp off. Stompa kills 8.

Post-game thoughts
Okay several mistakes done but a couple of months since my last game so no wonder.

Was a good learning curve during the game but Oyvind is left unsure on where to go with his list. I think a DP, either rifle brutes or formation and more bearers would do a lot. But he’s still new in the game so plenty of time figuring stuff out 🙂

For myself.
Stompa, good but not that funny to play with. If I meet knights fair enough, if not I’ll drop it for funnier stuff.
Bully boyz fantastic. Huge points sink but worth it. Massive threat every turn.
Lootas I deployed as an ass. I’ve never played a game where they did nothing of value..
Weirdboy. Just wasn’t his day. First time that happened though. Still prefer him over the painboy.

Next time I’ll test the bully boyz with a more robust CAD to support it. No stompa but battlewagons and trukks. I also want to test out flash gitz.

One thought on “Battle report. Orks vs CSM”