1495 points. I love the bully boyz and I want to pit the stompa against a knight.

Warlord traits:
– Orks: conqueror of cities, divide to conquer
– AM:

The game
Hmm, I had expected to face a knight! Ah well, let’s see how this went.

Turn 1:
I started. Nothing on so I shuffled forward.

He dropped his sentry guns behind my stompa and midfield on one objective.

One vet squad also flew in midfield towards center objective. Demolition squad flew in my backfield as well towards two bully mobs and disembarked.

Sentry guns didn’t hit anything. Valkyrie unloaded on one bully mob but I saved everything. Demolition squad took out 1 bully boy.

Turn 2:
Stompa moves on a secondary objective, disembarked bully mob that moves towards his primary. A lot of ineffective shooting but the stompa takes out the nearest sentry squad (first blood) and halved the other.
In his turn everything but one vet squad arrived.

Bollocks.
One bully mob deadz. He then flew one vet squad off.

Turn 3:
One bully mob moved on his primary. The other around the big building to get cover as I couldn’t assault anything.
Stompa took one hullpoint on a valkyrie and two on the vulture. 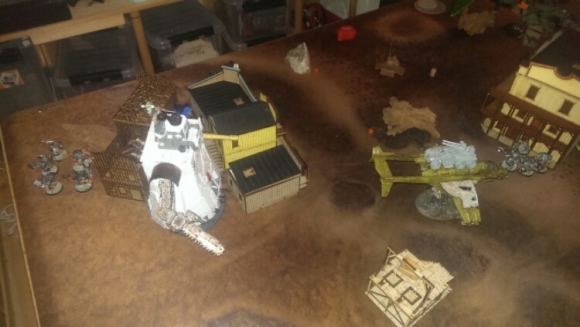 In his turn the vulture moved straight ahead as I got that result after the shooting. Then the rest of the birds moved.. 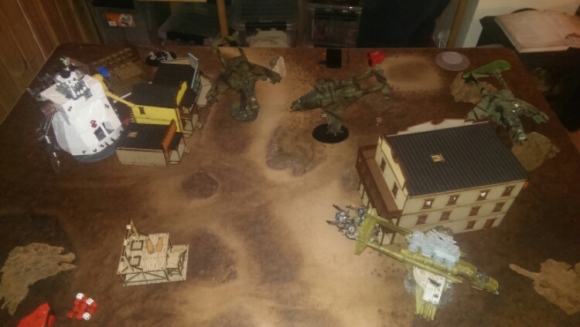 A lot of shooting against my midfield bully mob but they weathered the storm. Stompa took 3 hp though.

His turn. He moved in on my home base bullies. 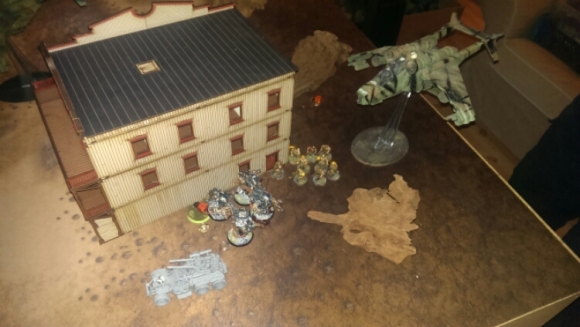 Not the best of odds..
Then the Old Man himself moved up against the other mob in his home base.

In the other corner, my own home base things didn’t look to good but I weathered the worst.

Turn 5:
Stompa killed some in the shooting and repaired a hp. Bullies assault the vets. Kill most but I’m shit out of luck and they die..

So he moves onto the objectives. I hope there’s a turn 6 so I can get linebreaker and his primary.

Big mek disembarked and unto a secondary objective. Stompa blew up a vet squad on his primary. Didn’t get to assault. Shouldn’t have shoot with that much..

Pesky birds are back.

1-14 loss. Did not bring the right tools for this game.

Post-game thoughts
Well that didn’t go very well and it’s another game where I don’t get my points back in the stompa. 6 fliers is the most I’ve meet in any game I think. Not the easiest prospect when I forgot my warlord trait and he got everything in more or less.
Had I meet that list with my ordinary Ork army or Green tide it would’ve been another game all together.

Though back to the bullies and stompa. I think that you can’t have both in such a small game. It doesn’t work. 2k was okay but 1500 far from it. But it’s been good testing these things out and I have a better idea on how to utilize them in the future.

Still. I want to test out my stompa against a knight. Next time!