Time for something other than CARNAGE – this week I’m playing against Trond and his Blood Ravens!

The game
Trond wins the roll off but elects to let me deploy first. The bastard tried to seize but failed even with +1 to his roll. Insert snickering.

Turn 1
I start. Dreads and morkanaut aim for his right flank while the gorkanaut heads up midfield. Zooka kans aim for objective 4 for vp.
I’m not in range of anything in the psychic phase.
In the shooting I gun for the closest tactical squad with the morkanaut, gorkanaut and shoota kans. I take them out scoring first blood and a vp for taking out a squad in the shooting phase. All other units run.

He moves cautiously forward, he’ll probably aim to punish me in the shooting phase as his predator and devastator has armourbane 😦

Whirlwind opens up but the armour saves me. Multimelta dread misses (puh), same with a ML from a tactical squad. Plasma cannon from the devastators take out the center dread. Predator target the morkanaut and take two hull points immobilizing it. LR takes a hull point off the gorkanaut. He then scores 2 vp from holding objective 2. 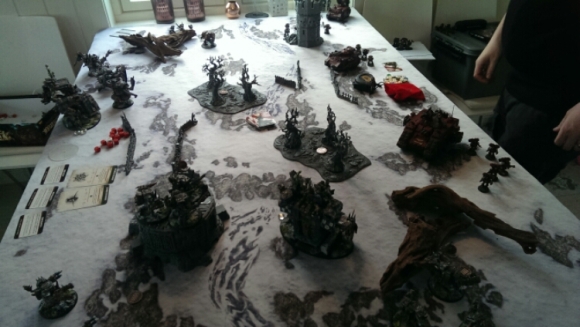 Turn 2
My dreads aim for the tactical and the dreadnought, gorkanaut for the LR.
Psychic phase doesn’t do much as I failed my casting.
In the shooting phase I decimated the assault squad, leaving only the sergeant alive. Other than that I didn’t do a lot.
One dread reached the tactical squad on the left flank killing it outright. The other failed to reach the dreadnought.

Gorkanaut reached the LR and inflicted 3 hp…damn it I’m dead!

Zooka kans score objective 4 again so some luck at least..

Though I believe it’s the last turn of my gorkanaut..and warlord..!
Melta dreadnought aims for skorcha kan, same with the predator. This turn will really hurt!
Shooting. A lot of misses but devastators take out the skorcha dread and the one pen on the gorkanaut my mff saves.
He now assault the gorkanaut, though I killed the last assault marine on overwatch. Assault terminators reach me though. I only killed one..He misses – PUH!! Then they failed their moral check. UN-fucking real! I was dead certain I was going to lose big there. I even scored a tactical vp due to him failing 😀

Turn 3
My last dread aims for objective 2 and the tactical squad there. Gorkanaut goes for the terminators while the Zooka kans move forward to support the gorkanaut.
Psychic nothing. Shit I could’ve scored a vp if I summoned!
Shooting went shit as well..only 1 hp off the melta dreadnought.

Then assault. My dread needed 11 or more to reach the tactical squad on objective 2 – I managed it and wiped them scoring another tactical vp 😀

Trond tried to get in the storm talon. And failed yet again. Let me remind you he had +1 to his roll. Lol 😀
Melta dreadnought goes for objective 3 and the LR against the zooka kans.
Psychic phase. Librarian target the dreadnought with the beam power, and succeed casting it. My rolls in the psychic phase are appalling!

He hits but failed to penetrate my av.
In the shooting the librarian legs it away from the dread. Devastators target the dread and glanced him to a wreck. Melta dreadnought misses the morkanaut. Predator glanced a hp off the morkanaut though.
LR shoots at the zooka kans taking out 2. He passes the test.
In the assault I lose 1 hp, he loses nothing. Bah..boring combat! He then scores objective 3 and for holding twice as many as me.

Turn 4
Simple turn. Zooka kan move against terminators. In the psychic phase I manifested AND hit the dreadnought with killbolt! He covered saved but I scored a tactical vp for manifesting so yay for that.
Shooting I didn’t hit anything.
In the assault the kan charged the terminators and killed 2! He’s killed in return though. I then score another tactical vp for having 3 of my units in my own deployment zone and none of his. So maybe it was Morks plan to keep the morkanaut immobilized in my deployment zone after all!

Trond is up. Storm talon comes on. 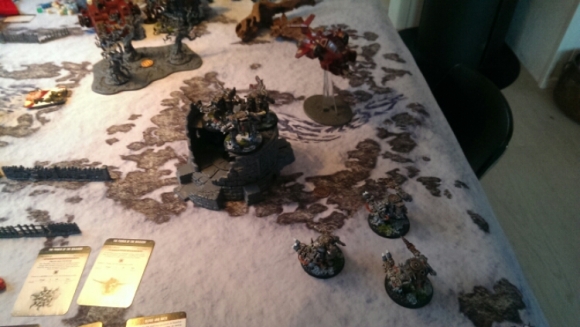 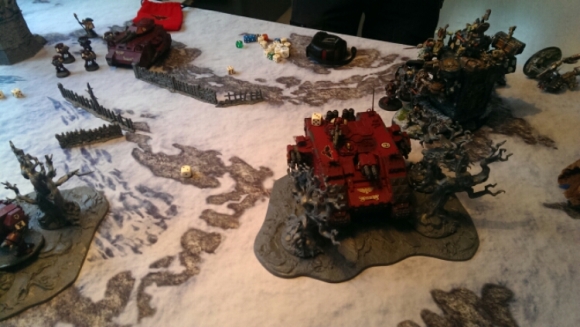 Trond is focused and aims for points.
Shooting. Melta dreadnought misses again. His targeting array sure sucks! Devastators miss for once and the morkanaut saves both pen hits from the predator.
Storm talon opens up on the rokkit kans and take 3 hp off them.
Assault. I kill one, he takes 1 hp. Stall.
He then has 1 vp for objective 3 and gets 2 vp for having 3 of his units within my deployment zone.

Turn 5
Quick turn.
Psychic – don’t manifest anything.
Shooting – glanced the melta dreadnought to a wreck.
Assault – killed the last terminator. This nets me 1 tactical vp. I then consolidated towards his line for linebreaker. 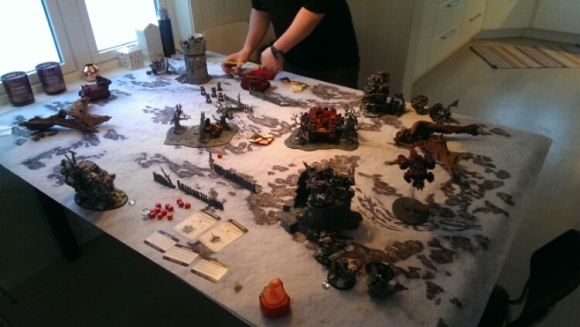 Trond. His turn is also fairly quick.
Last tactical squad goes for objective 3, predator target the gorkanaut and the storm talon goes to hover mode to annihilate a kan mob.
Psychic phase. He cast the invulnerable save dome. I didn’t stop him.
Shooting. I save a lot but 1 rokkit kan die and the gorkanaut dies.
He takes 2 vp for objectives 1 and 6 + 1 vp for taking a vehicle

Turn 6
Even faster turn. Warlord hides, painboy target the predator. Kans target the skimming storm talon.
Psychic I actually do a lot! First I frazzled two tactical marines, they failed the moral and run 11. I then take a hp off the predator with killbolt. I do peril and lose a wound. Worth it.
In the shooting the kans take out the storm talon and earn a tactical vp.
Painboy then assault the predator and manage to glanced it to a wreck.

Trond goes after my painboy with everything he’s got. This’ll be rough!
And it is…after all is said and done he’s dead though he took one hell of a beating. He then takes 1 vp for a vp.

Turn 7
Not a lot to do now. My kans aim for objectives for tactical vp. Weirdboy jumped out and go for linebreaker.
In the psychic phase I peril and die, taking 1 hp off the whirlwind in the process.
In the shooting I run, the shoota kans scoring objective 6 for one vp.

Trond goes. LR aims for the shoota kans but failed to hit in the shooting phase. His devastators took one shoota kan and that was it. 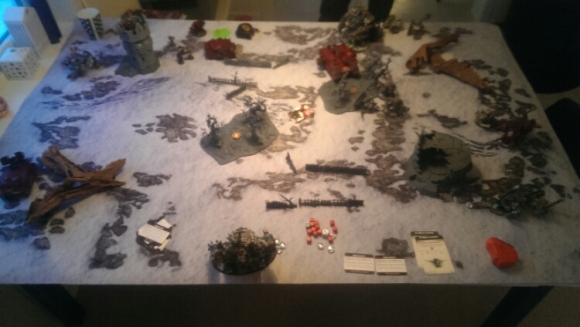 Post game thoughts
Well that was a close fought game! The campaign rules giving Trond armourbane on his two most dangerous units really swinged it in his favour. Though to be fair we both had our share of good and bad luck.

Trond is now getting dangerous in the campaign having won two games. I’ve got to step it up!