Played against Klas and his Tyranids today. This was my strategy..

The game
Klas won the roll and elected to deploy and go first.

Turn 1
Simple game plan. I advance. Weirdboy cast frazzle on the termagants, hitting and wounding 7 but he has a cover save that’s buffed with the venomtrophes so he saves all.
Shoota kans and gorkanaut shoots at the gants and only fare slightly better killing 3. The rest I concentrate on the warriors, killing them and earning first blood. Dreads run and I’m done.

Klas advance hard with his right flank and hold his left. Psychic phase nothing happens and shooting isn’t very effective. One shoota kan is wrecked and 2 hp on skorcha dread. 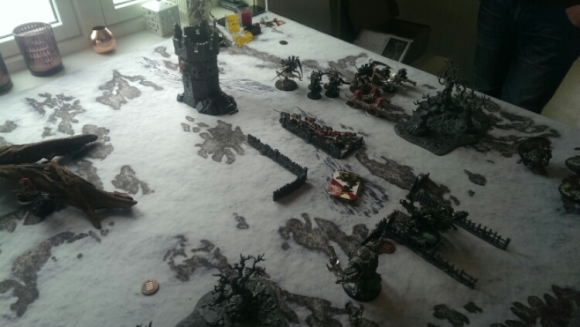 Turn 2
I split my dreads. One aim for the left flank, the rest against the center.
Psychic nothing happens.
Shooting is largely ineffective but I wound 1 venomtrophe, 1 woun on the tyrant and killed a hive guard. I then assault the gants with my closest dread. Kill 5 and we’re locked in combat. 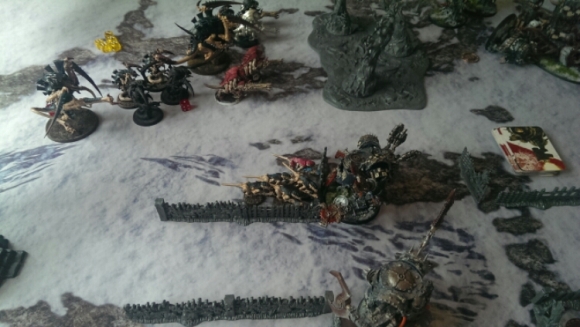 The reserves comes in.

Ouch.
Klas goes closer, damn those medium sized bugs! Tyrant aims to assault obviously. He succeed in manifesting a psychic power, getting a tactical vp in the process. He then opens up on the shoota kans wrecking one. He also wrecked scorcha dread. His reserves all misses – some luck at least.
In the combat my dread in combat with the gants killed 5 leaving 1 alive. Doh! But since the tyrant shoot at the other one he can’t assault me.

Turn 3
I aim it all on mass assaults. Rokkit kans on the reserves, gorkanaut on the tyrant and the left dread on the hive guard.
Shooting, I kill 3 gants with the rokkit kans. I then assault. Dread killed the hive guard. Rokkit kans killed enough to force the gants to flee off the table. 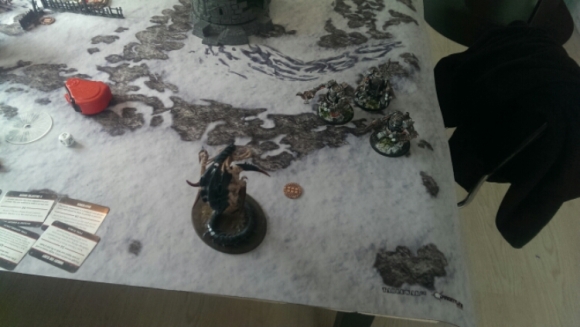 Center dread kill the last gant. Gorkanaut then kill the tyrant – he couldn’t hurt me though. 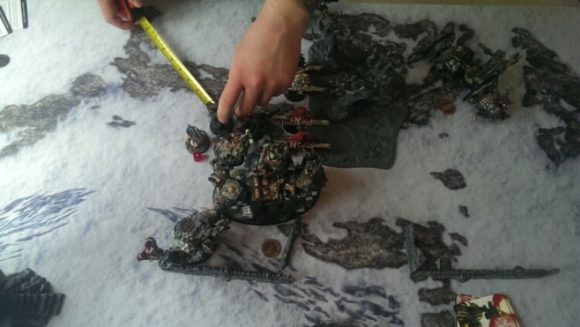 Klas has a quick turn. Shooting is ineffective but the trygon assault the rokkit kans pulling them to a draw. His carnifex assault the gorkanaut and explodes the bugger…shit! 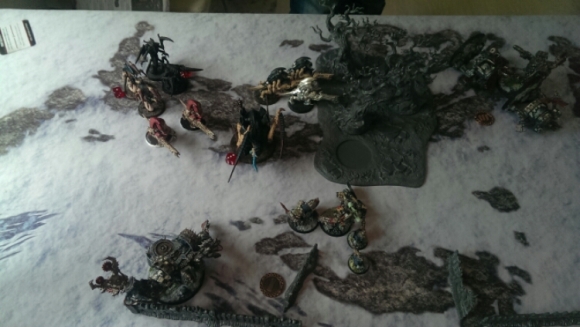 Turn 4
My warlord legs it – fast! Morkanaut goes onto objective 4 for a tactical vp. One dread aims for the carnifex.
In the shooting nothing happens.
In combat the dread killed the carnifex on impact hits. Trygon vs kan is a draw again.

Klas has another quick turn. He focused on taking out the closest dread – which he did. In combat another draw.

Turn 5
I’m quite fast as well now. My warlord embarked the morkanaut which moved back out of range. I then targeted the venoms killing two. One unit failed a morale test gaining me a tactical vp.
In the combat the trygon killed the last kan.

Klas goes for blood. My remaining shoota kan is immobilized and the zooka kans is left with only 1 left on one hp.

Turn 6
I don’t move. I first frazzled a wound off the last venom, morkanaut then kill it. Nothing else happened besides me getting objective 4.

Klas goes for vp and scores a whooping 5 vp on his turn. Supremacy, objective 2 and behind enemy lines. Puh for being ahead!

Klas then rolls a 2 a game over. We both get linebreaker.

Post-game thoughts
Well his venomtrophes sure helped and having really high T on most of his units. I couldn’t really do a lot in the shooting phase. Luckily I did better in my objective scoring and combat. That and the fact that I managed to score vp each turn and Klas didn’t secured my win.

Maelstrom missions are by far the most fun!