15 Comments
By bigbossredskullz Age of Sigmar, Realm of Chaos

..of Matters Arcane and Magic 34 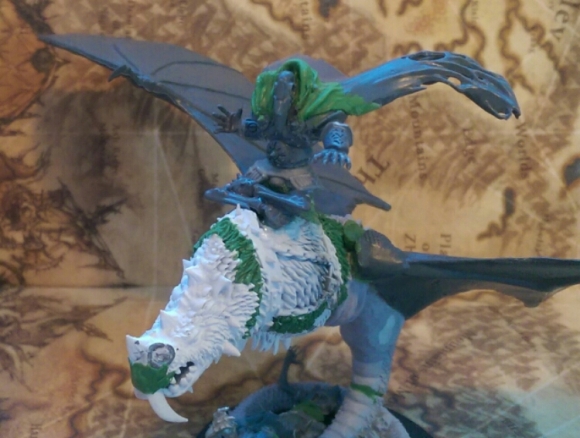 Hurvald Lord of Aeons sat astride the mighty void serpent Ophioneus..the path to glory still unclear to him..so many paths..so many possible endings..only one strand of fate the right one..

Hurvald is weakened..his frame only a husk..skin stretched over bones..though in the caverns of his eyes an unrelenting gaze penetrate..

..the Lord of Aeons can see the end of his path..one that finally will see him reach his true potential as a demi-god and warrior scholar of tzeentch..

..only to find that strand amongst the endless strands of fate..

I assume an explanation is needed 🙂

In PtG your ascension to daemonhood is the end goal and you achieve this by accumulating favour points until a set value. Reach it and you become a daemon prince, but – there’s always a but right 😉 You need to win a game as a daemon prince to comply the ascension.

So with that reasoning I decided to represent this in miniature form by having the first step represented by the Lord of Aeons on top of the void serpent as a count-as daemon prince and then a final variant when (or rather if) he reach it.

Fun stuff imo! Still have a way to go with these two versions of Hurvald but I’ll keep you posted if I can keep my steam up here. The air is leaving this balloon very fast now 🙂