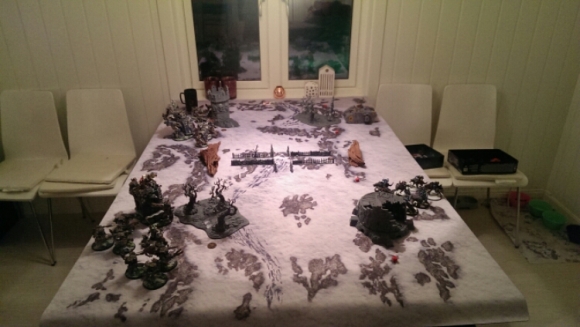 Turn 1:
I shuffle forward with most of my stuff. I get the card saying take objective 4 lucky me it’s on my right flank so first VP to me.  I take one wound off a wolf and that’s it.

His turn, this happens.

Land raider shoots at the middle dread and misses. The wolf guard shoot but don’t inflict any damage on the kans though he scores 2 VP.

Turn 2
Grotzooka kans move away from the wolf guard to shot at them. Two dreads aim for the Land raider while one dread takes flank aim at the wolves. The kans on the right move forward.

In the shooting phase Grotzookas destroy the wolf guard (yay) while the Gorkanaut kill one wolf. Morkanaut wreck the drop pod.
I claim objective 4 again, cleared my zone within 12 so another there and first blood + destroyed one complete unit in shooting phase.

He move the land raider towards objective 5 and wolves towards the Gorkanaut. Shooting took 1 hp off the middle dread.

In the assault the wolves charged but the Gorkanaut did well and killed two (4w) versus 2 hp. I win combat! He takes 1 vp with the raider. 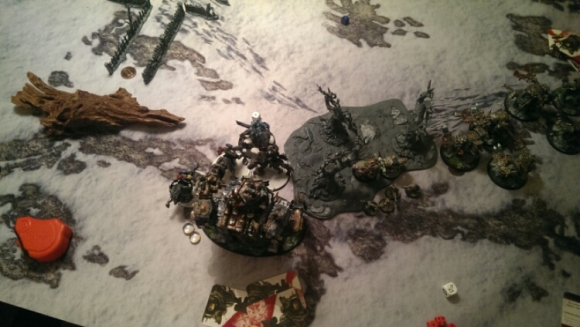 Turn 3
I aim for more tactical objectives. Shoota kans for objective 3, zooka kans for assisting the gorkanaut and slay the warlord.  Two dreads for wrecking a vehicle.
Nothing to shot at.

In the assault the dreads assault and explode the raider forcing the grey hunters to disembark. Zooka nauts assault the wolves. Combat goes my way and even Harald isn’t saved. Yay dread mob!

He then shots a hp off my dread and assault it but loses with two. In the other combat. Poor puppy..

Turn 4
Two dreads assault the grey hunters and wipe them out tabling him. I take linebreaker and objective 6 this turn.

Post game
First game against Hallvard and I kinda feel bad but he didn’t have the right tools against a dread mob. I’m also seeing that the dread mob is very good in tactical objectives missions. Very good. That’s it for this time 🙂