This is the first game in our new campaign. I’m not the storyteller but this battle takes place on the space hulk/asteroid of my Orks. Space Marines aiming for a stompa building site in a huge crater. Mek boss not having any of that nonsense and kicks his dread mob into gear (literally).

Turn 1
He does his scout move with the bikers.
Tried to seize but failed, I begin.

I’m vary of getting infiltraters in my back but I want first blood. I’ve got bead on one squad and manage to wipe them. I’ve also score first blood, didn’t even get to fire with the morkanaut.

His turn. Deep strikes the dread aiming for objective 6.

Bikers aim for objective 4. Dreadnought fires at my dread holding objective 6, scores a penetrating hit but Kff saved me. Bikers turboboost on objective 4.

Turn 2
I advance on the pod and dread as well as the bikers. It’s wipe out time.
In the shooting I take out the pod and the bikers. I then assault the dreadnought with two dreads. He immobilized one and I blow him up in exchange. 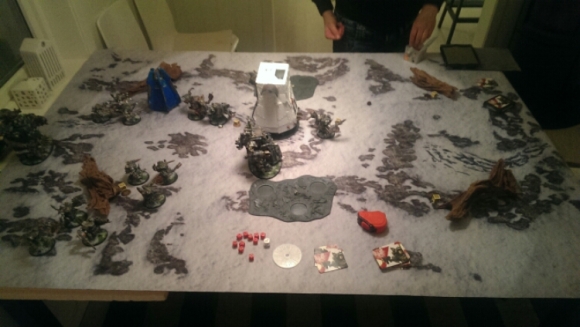 I score an objective with taking out a vehicle.

His turn all reserves show up. Yikes.

Both LS Storm miss with their multi meltas on my gorkanaut. Phew. Passengers fire on shoota kans and miss.
Stormraven guns for the morkanaut but nothing hits. Goes for the rest as well except the talon takes a hp off the immobilized dread.

Turn 3
One objective is taking down a flyer, the other holding objective 5. Rokkit kans take the objective and everything I have fire at the talon to no avail.
Gorkanaut targets Telions LS Storm while the zooka kans target the other. Gorkanaut makes short work of it and scores 1 vp by killing Telion. Zooka kans take the other LS Storm. No more multi meltas!

His turn. Raven disembarked the dreadnought and then guns for objective 4.  Talon takes out the immobilized dread. Poor thing 😦
Though he provides a cover save for the remaining dread so all is well in the end 🙂 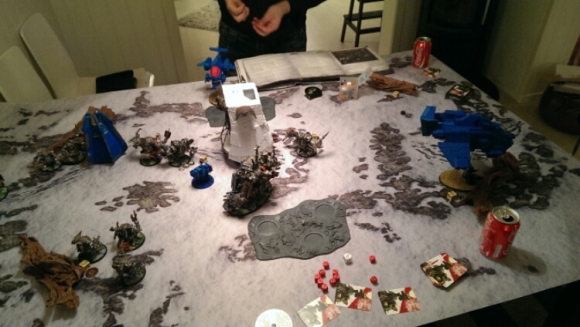 After the shooting the talon still lives (or is it “still flyes”..) but the scouts and dreadnought is dead. I take back objective 6. 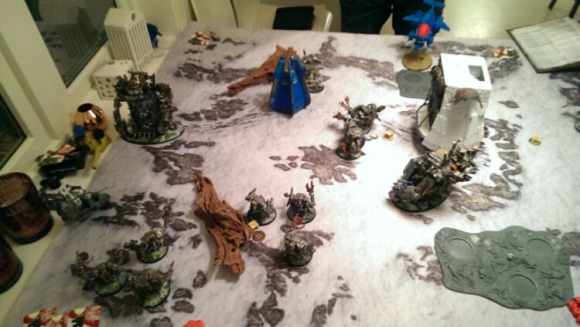 His turn. Talon and raven target the lone dread. You stay strong homie!

Not looking good with the sternguard disembarked..though the flyers deal with it and explodes the dread.
Talon takes objective 1 and for destroying one unit.

Turn 5
Nothing happens. Don’t hit shit neither in shooting or reaching the talon in assault. Shite…that cost me 2 potential vp by taking the talon out in assault (flyer +  destroying 1 unit in assault).

His shooting failed as bad as mine. He takes objective 1 and 3.

Turn 6
Yay turn 6!
I finally take out the talon in the shooting phase. Shoota kans, never leave home without them! The rest shot at the raven but I only take one hp.
The morkanaut shots up most of the sternguard then assault and kill the last dude. I score 2 vp, one for the flyer the other for destroying a unit in assault.

His turn. Raven hold unto linebreaker. He then aims for the gorkanaut where my warlord is embarked.

In the shooting phase I managed to take down the raven. Morkanaut manages to run on objective 3 and linebreaker. Gorkanaut then assault the disembarked captain and kill him. He failed one save. I score 5 vp this turn and wipe him from the table.

Post game
Don’t have a lot to add besides concluding that the dread mob is the funniest army I’ve ever played with. It’s simply put a ton of fun so I can’t do anything but recommend it wholeheartedly 🙂