Been a bit since the last battle report!

We play the scenario like this.
– 4 players
-750 points a side
– 4 turns
– Primary objective in centre of the battlefield – 3 vp.
– Secondary objectives as normal
–  Deployment, in each corner.18 inches from centre and between the players
– We throw seize the initiative each turn to mix things up. We go chronological per dice result

The participants:
Tommy (me) with the Bully boyz formation.

My warlord is in the tower.

Don’t know exactly what he plans with this but he was lucky and gets a short end all for himself.

Turn 1
I seize. One mob stays in cover behind the tower, two others aim for Tau. I run in the shooting phase and the turn is a wrap. 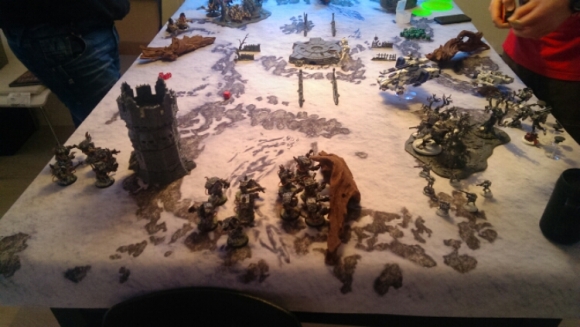 Andreas goes second. He aims primarily at my two mobs but one part against the center. 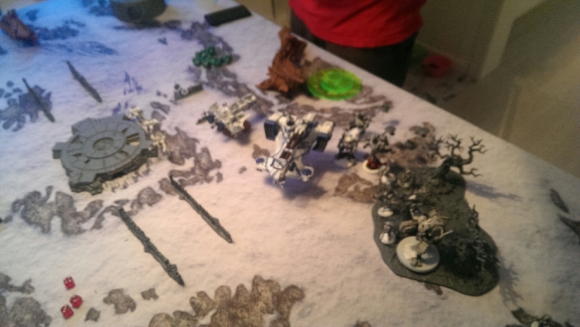 I come pretty unscathed through the shooting though I lose one bully in the closest mob.

Klas shuffle forward but doesn’t do a lot.

Turn 2
I seize again. I go straight for the broadside and the firewarriors in the forest. I failed to reach the warriors but I get the broadside. Overwatch hurts me bad though I killed the broadside – first blood. So some good came out of it but I was close to give up first blood by dying due to the overwatch. 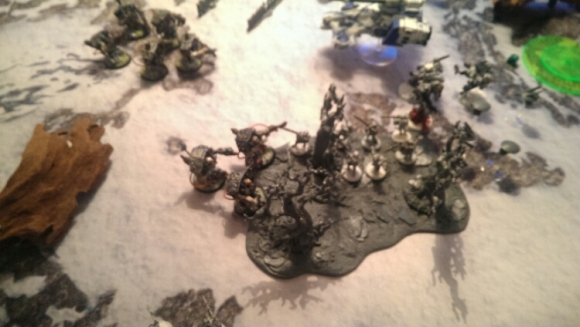 Andreas now goes for blood. Encircling the solo mob and kills them outright in the shooting phase. Ouch..

He then pot shoots at the other mob but nothing happened.

Klas starts to move out of the forest and gets in position for the primary. 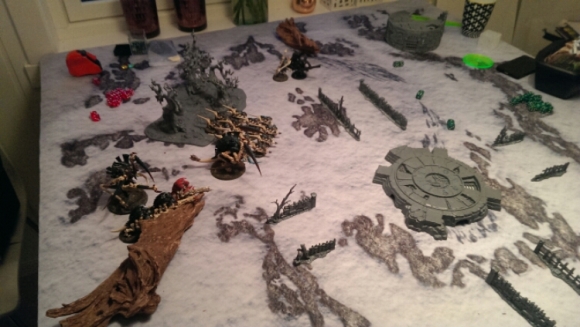 Gets fnp in the psychic phase though perils and takes a wound. Shoots a hp off the piranha in the shooting phase.

Turn 3
Klas gets the first turn. Goes straight for the primary. With everything. 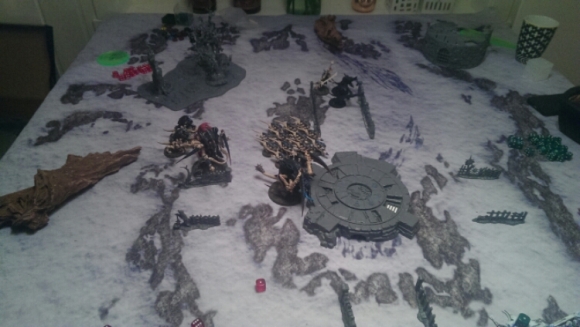 That’s a lot to shift! In the psychic phase I managed to deny him though. AWESOME 🙂

Andreas is more focused on my mobs rather than the nids in the center. Pump a lot of wounds in the mob that has linebreaker. I’m halved and that’s luck! Next he target the tower and managed to kill my warlord. Bah! Luck only lasted a short while..

Turn 4
Last turn, Andreas starts. He’s still obsessed by my bullies and just hammer them. After he’s done I have one left with 1 wound. Insane luck – go blues! He shots a bit on the nids but don’t do much. Finishes with hiding his warlord.

Then it’s my turn. I run 6″ in with my 1 wound solo bully just to secure linebreaker and get away from the nids. My last mob charges the carnifex on the objective and kill it. I’m now close enough to score the primary but the gants are right there too and Klas has a CAD list and OS on them. This game is lost..

Klas goes straight for the primary but just by getting close enough snagging it from me. He also flies the tyrant in my deployment zone getting linebreaker.
In the shooting phase he doesn’t do much damage – or rather not enough. He targeted the tau warlord but he was way too protected to take out.

Klas wins with his tyranids!

Post game
Well that was something. Andreas is starting to get a lot better with Tau and doesn’t do as much mistakes – though he lost the game by trying to deny my linebreaker instead of killing the bugs on the primary. At least that’s my opinion. Still that Tau firepower is something to behold and rather scary (and annoying tbh) but it is what it is.
Klas got the best starting position and didn’t do any mistakes and secured an easy win.

For my own part I think bully boyz are a bit boring. I’ll write up a new list and get more variety – Ghrisnak style!

Btw, lack of pics in the end was due to me losing the draft in turn 3 – I then had to write the entire batrep all over again in turn 4.