Here’s the comp pack for those who hasn’t seen it.

10 archers not in the box but in the list. Oyvind plays Chaos and as you can see it’s a proper lineup of various cheese 😉

I started. Casket reduces Scyla with 3 wounds.
Carrions, archers on foot and horse archers take 1 objective each. Chariots, giant and king move just a tad forward as I’m out of charge range anyway. 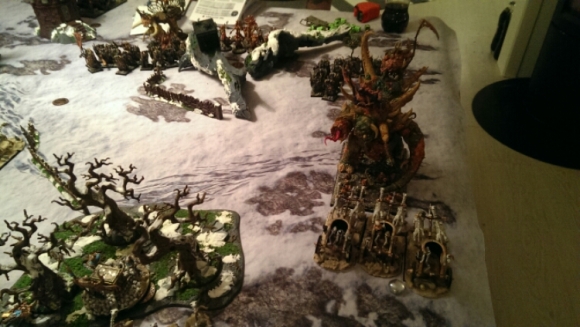 Oyvind is more offensive though..Hellcannon misses the king, grinder killed 1 carrion. Glottkin then charge the chariots and Scyla charge the giant. Oyvind start with Scyla taking 3 wounds off the giant but the giant killed him in return (first blood!). Glottkin killed 3 chariots (15 wounds..) and take 4 in return.

Turn 2
I started again!
I gained 2 chariots from the icons. Other than that I did not do much except the horse archers taking 4 more wounds off Glottkin before I charged the grinder with the carrions, and 1 chaos warrior unit each for the giant and king. Giant killed 1 warrior, grinder killed 3 carrion but take 2 wounds from the last bird. King is ineffective against those annoying shields defending them from his potent attacks. Giant take a wound in return.
Oyvinds turn. Warlord called in 5 knights.. 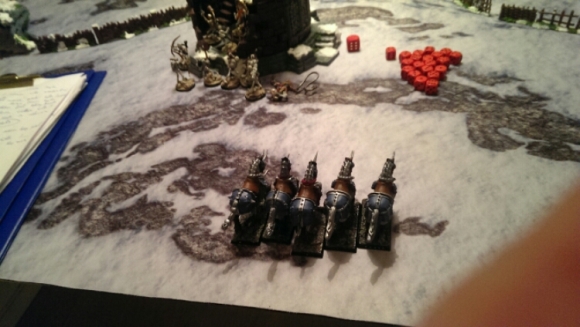 The knights are PiP still

Mutalith then inflicted 6 mortal wounds on the king – ouch.. hellcannon then take 2 wounds on the casket.
Knights charge archers, 10 chaos warriors charge the chariots and warshrine charge the giant.
Mutalith killed the king – the mutalith is a nasty piece of work and only take 1 wound in return! Giant then move 3″ to avoid the shrine and killed 3 chaos warriors. Archers killed 1 knight but they are killed in return. Luckily the knights are reduced to 4 models and can’t hold the objective.

Turn 3
I get to start first again. Gain 2 chariots back from icons. Casket wounds a chaos warrior unit and the mutalith. Horse archers and chariots shoot at Glottkin reducing him to 8 wounds. In combat Glottkin is reduced another 4 wounds but they killed another chariot. Mutalith killed the giant. Necrotect is in combat range of the 4 knights – he takes 1 wound off the knights but 3 in return.

Guess what Oyvinds warlord managed.. 😉
He then advanced in against my dwindling force.

Turn 4
I start yet again. This is honestly what keeps me in the fight as my icons are saving me. Gain 2 chariots from the icons.
I don’t have a lot to do but my shooting and combat reduced Glottkin to 1 wound(!) they killed only 1 chariot in return. Knights killed the necrotect and the mutalith killed 2 horse archers. 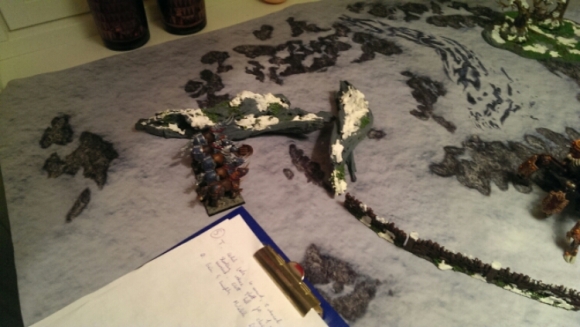 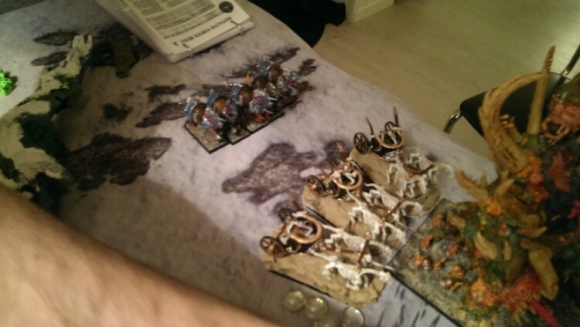 Screw points, go for the kill! 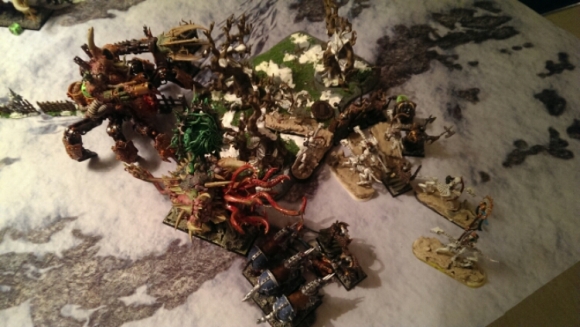 I gained 3 horse archers. I take 3 wounds in shooting and 2 in combat on the chaos warriors.

Turn 6
I begin and gain a few horses. Nothing much happens beyond shuffling out of damage’s way..
In Oyvinds turn the warlord called in 5 more knights..

Everyone charge the horse archers. Mutalith killed 2, I move away from the biggest threats and then the archers killed 1 warrior who killed 1 in return. Knights reduced my last miniature with 1 wound – I SURVIVE! 😀 ..

Post-game thoughts
Well in some ways that went better than I thought and if I hadn’t spread out as much and made a few better choices like using the king with the chariots I think the outcome could have been a bit different. I also should’ve dealt with the mutalith and his warlord earlier.

Anyway, my list was as I originally expected not the best and this game proved that. Would be fun playing this game again but then with my Chaos Dwarfs who are a lot more dangerous in the shooting phase.