I’ve been pretty set that I’ll do the loyalists first and the Deathwatch team obviously needs an inquisitor to boss them around. Originally I didn’t want such a big retinue but once I started inspiration got the best of me.

So to recap a bit. Me and WilhelMiniatures are doing a project together with a Deathwatch vs Genestealer cult as the basis. We’ll each make a Deathwatch team and a Genestealer cult and then alternate while playing. However as we both wanted to add inquisitors into the mix we decided that the main antagonist would be Nestorian, a former Ordo Xenos inquisitor while on the other hand is Berrugoete his brother. Also an Ordo Xenos inquisitor but one still loyal…or is it that simple? Remember the writings of Nestorian.

Nestorianism is a doctrine that emphasizes the disunion between the human and divine and seek to join and enhance the human by joining the hive mind and thus become divine.
– from the Teachings of Nestorian, former Ordo Xenos Inquisitor

Okay now before I start on my inquisitor here’s the last member of the Deathwatch, a Blood Angels apotechary.

He’s next up in the painting que and I’ll give him due props when done.

Large part of body is mechanical due to the environment he normally operates in. This is also reflected in almost all of his henchmen.

Notable features are the mechandrites and the beak which are able to filter and recognize airborne xenos agents. 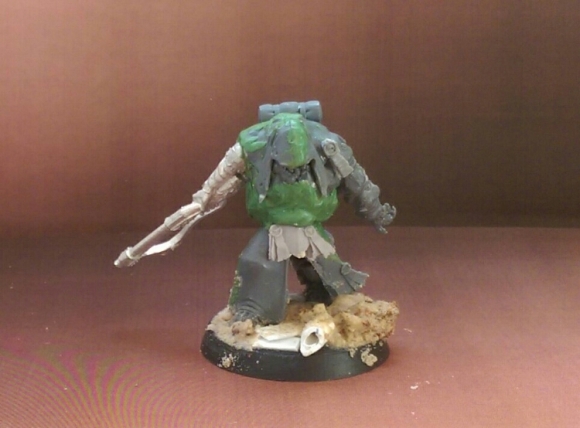 Modo-Q211 is a specially fitted servitor who collects and harness the various agents for later studies.

In addition Berrugoete employs a range of various henchmen for the more mundane assignments. They are highly expendable even though they are highly trained and ferocious killers with some if the best tech available.

I’m still uncertain on colours for the INQ and retinue. Any ideas?