Third game and the Deathwatch is released!As stated previously, me, Helge and Alexander are doing this both in a quite casual take (Meaning no big event) and as a slowburner with things unfolding and developing as we go along. We hope you are patient enough to be part of the ride!

The third game is linked to the previous two games (Investigation & Escape). In short Berrugoete the Ordo Xenos Inquisitor investigated a airborne viral strain, discovering a Genestealer cult behind it and barely escaped to tell the tale.

Vengeful he has released a Deathwatch kill team to root out the cult once and for all. Locating the assumed centre of the cult on the surface. 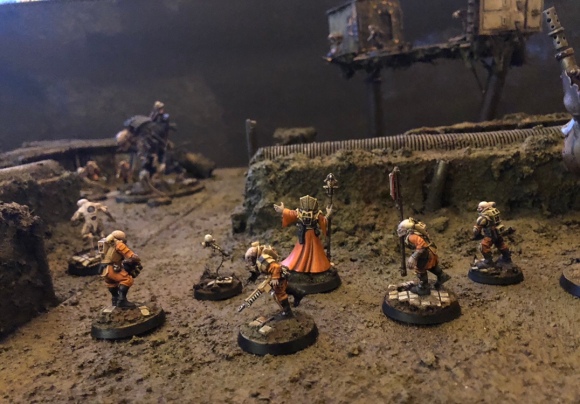 In an area on the outskirts of the native hab units. 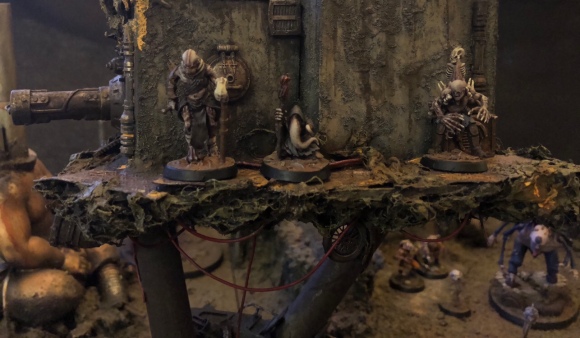 The allegiance of the natives is unclear but they are seemingly docile.

The DW mission is simple, reach the assumed centre of the cult and Exterminate the threat. This is in the other end of the board meaning there’s a lot to move through.

We used the AoM version 3 rules.

Each DW member has 3 wounds, hits and wounds on 3+

The cult is primarily 1 wound and 4+/4+ but some like the Magus and the unknown hybrid have more attacks and wounds. The carnifex hybrid has 6 wounds, 6 attacks and hit/wound on 5+/4+, in addition the carnifex started in reserve.

The natives are from the #nestorianinfestedpopulation. Meaning they are controlled by the cult, they are 1 wound, 5+/5+

All cult affiliated models respawn when killed on a 4+. This is to simulate an endless stream of bodies.

Tor’ghan of the White Scars felt ill at ease..

A recurring dream of a long dark corridor closing in around, almost suffocating him was a premonition unlike any other he had experienced..normally he dreamed of the steppes, but now they felt just out of reach and darkness had taken their place..

The now..pay attention on the now.. His Brothers in Reserve needed his mind and skills focused at the task at hand even if it where a standard mission against a Genestealer cult..

Visibility, smells and the instruments in his blessed armour was not making sense of this enviroment. But instinct told that it was a threat surrounding them, closing in just outside of sight..

Tor’ghan had fought the malign Hive Mind before but this felt different..still, they forged ahead letting Stronor of the Iron Hands cover them with his Blessed heavy bolter..

An animalistic roar, amplified by the narrow corridors exploded from the far end.. Tor’ghan and his Brothers in Reserve immediately focused their search, speeding up to face whatever lied ahead..

In a flanking move Varan Dor of the Imperial Fists faced the first hostile and quickly put him down..

Ulhednar of the Space Wolves could not see his opponents but even the pungent fumes could not distract his senses..claws always ready..

An unknown hybrid leapt at Ulfhednar, claws against claws..this must be the creature the Lord Inquisitor talked of.. 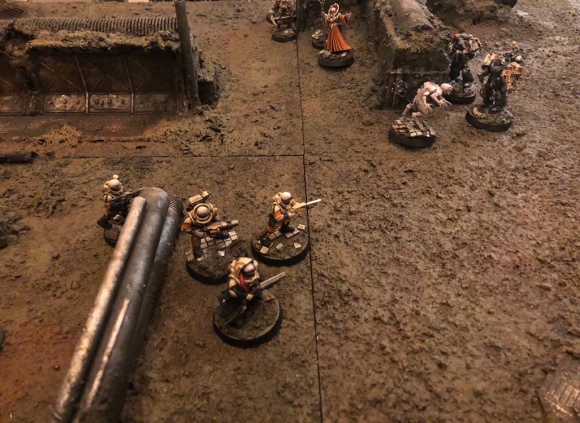 Tor’ghan covered his Brother in Reserve as a group of cultists emerged, firing with abandon..hurting their own in the process yet forcing Tor’ghan to take a bullet for Ulfhednar as he was to distracted in making a kill..just a flesh wound though..

Just behind the cultists and surrounding them now, the docile natives..Tor’ghan started to keep a closer eye at them and was almost caught off guard by one jumping off the top of a building trying to hit him..instead the unfortuanate missed and killed himself in the process..yet Tor’ghan had no more time to think of it as..

..and more cultists joined the fray.. 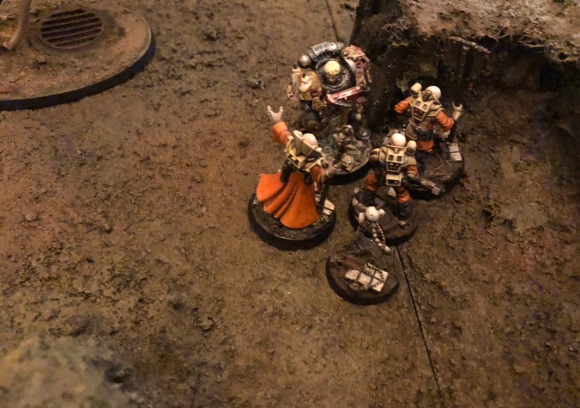 Now each marine where all on their own..outmanned but Tor’ghan and his Deathwatch Brothers kept on pushing forward..the mission driving them..

Varan Dor faced off against a Magos..one that simply would not go down as the cultists threw themselves against him, giving their lives so that the Magos could live..yet Varan Dor was not deterred as a Magos was always a good kill and would probably defuse the focus and murderous intent of the cultist with their leader dead..

At the entry point of the target area a massive hybrid monstrosity blocked the path..the source of the roar..a being neither Ulfhednar nor Tor’ghan had ever seen the like of..this did not delay them from assaulting the beast head on..Ulhednar claws first, Tor’ghan bolter in support..a cultist in the rear pounded the centre with a grenade launcher, killing his own and keeping the marines suppressed..

Before Tor’ghan joined the fray his eye wandered the..noting the endless stream of cultists and natives surrounding them..then he slammed into the massive beast, drawing first Blood..this did not go unheeded by Ulfhednar, who redoubled his effort against the beast..

Varan Dor was wounded, but he held the flank from collapsing, alleviating the pressure on Tor’ghan and Ulfhednar in the centre.. 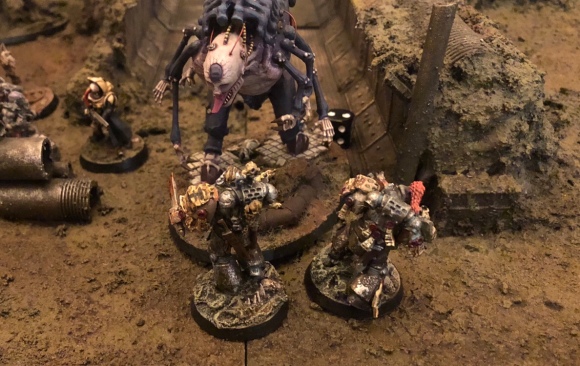 For all its size and horrifying appearance the monster was struggling against them but it still took a lot of them to bring the monster down..

..as it absorbed almost everything they had to give.. 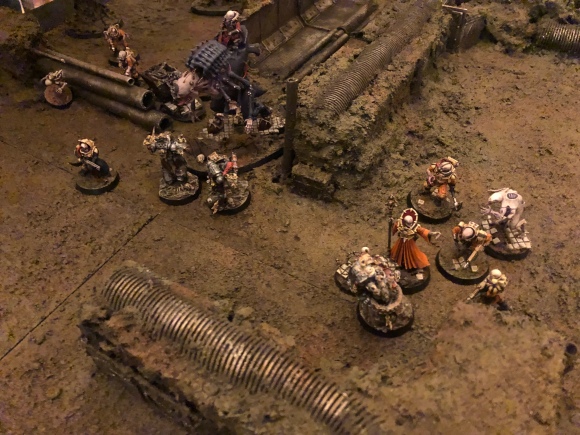 Tor’ghan was out of ammo and Ulfhednar only had two claws left..they where surrounded by an unknown amount of hostiles..but the path was almost clear as the beast finally succumbed..

Stronor of the Iron Hands had gunned down a massive cultist construct resulting in a massive explosion of spores..wounding Stronor and Varan Dor so badly that the Magos and the cultists on the right flank brought them down in the mud..

Growling to him, Ulfhednar told Tor’ghan to make a run for it..so all of this would not be for naught..claws blooded time and time again..yet Tor’ghan realized that even Ulfhednar would fall soon..

Pounding right through a native, Tor’ghan prepped a melta bomb and aimed to take it all down..if only he could reach the target in time..

Hearing a last defiant howl from Ulfhednar, who succumbed to the weight of numbers..lying face first in the mud..claws broken..

Though suddenly around the corner..

Yet..just on the outskirts of my mind..something.. 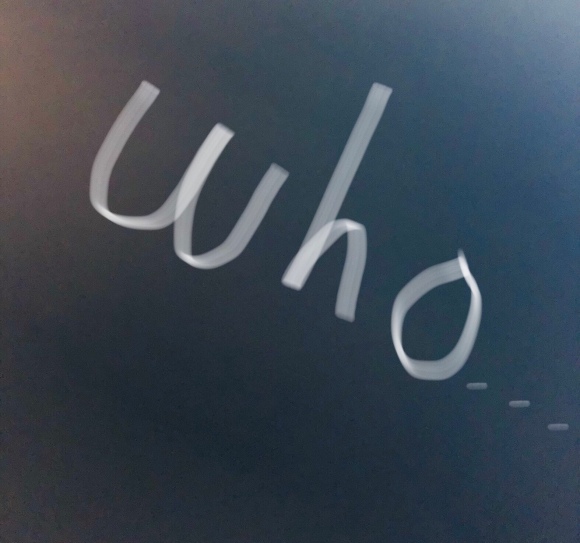 The main concept behind this scenario was introducing more characters, beings and a different perspective on the story. Hope you liked the difference and reading of Tor’ghan and his Brothers in Reserve!

What the ending of ULTIMUM will mean will be addressed as we go along but as a teaser, Nestorians’ involvement can be seen in one of the last panels.

Massive thanks to the guys behind the first batch of #nestorianinfestedpopulation – Nicolas, James and Erik you guys are awesome 😀

Also a huge Thank you to Helge, who’s hosting the games and are always a great guy to hang with! Beers where had and dice where thrown. What’s not to like!